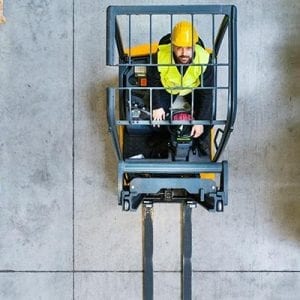 Top 10 Forklifts of 2018 promo image At the risk of torturing a cliché, forklift sales are up and continuing to rise. In the North American market, 2017 sales were up 9.5% over 2016, reaching a new benchmark of 253,146 units sold. That’s the first time more than a quarter-million units were sold in one year in North America, according to Brian Feehan, president of the Industrial Truck Association, the trade group representing lift truck manufacturers. There was really no downside to the market last year, as all truck classes were up over their 2016 numbers, including a 19% growth for internal combustion (IC) class 5 trucks. In terms of market share, electric trucks overall accounted for nearly two-thirds (64%) of all trucks sold in 2017. The news was just as uplifting on a global scale, with total units sold reaching a new high of 1.33 million. All geographies saw gains in units sold over 2016, with the biggest climb coming from Asia, which rose 26% in the past year. All told, world industrial truck sales were up 15% in 2017. In honor of National Forklift Safety Day on June 12, we present our annual ranking of the 10 largest global manufacturers of forklifts, as ranked by revenue. These suppliers provide some of the leading material handling technologies and vehicles used worldwide by companies to manage their warehouses and distribution centers. All financial figures are stated in U.S. dollars, based on the relevant exchange rate as of December 31, 2017. The information was provided by the companies, unless otherwise noted. Start Slideshow ›