You are here: Home / News / Warehouse News / The Drive to Digitize Manufacturing 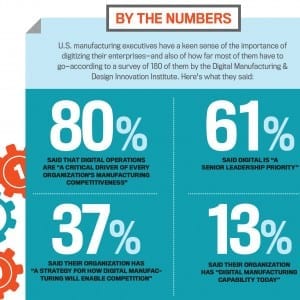 Can the Digital Manufacturing and Design Innovation Institute deliver on its promise to bring digital innovations to manufacturers large and small? Digitization is key to the future success of American manufacturing—which is why dozens of major manufacturers and the federal government backed the creation of the $320-million Digital Manufacturing and Design Innovation Institute (DMDII) on Goose Island in the Chicago River. Now the Obama administration and some of the icons of American manufacturing—including GE, John Deere, Procter & Gamble, Caterpillar, Lockheed Martin and Boeing—want to see DMDII over the next five years synergize the digital acumen of U.S. fabricators into the sort of determinative global advantage in manufacturing that domestic firms enjoy in software. “Digital is how the U.S. wins in manufacturing,” says William King, chief technology officer of DMDII, the organization led by the University of Illinois that launched in 2014 with $70 million in funding from the Department of Defense and $250 million in corporate commitments, and just opened its doors in the spring. “The whole world looks to the U.S. for digital innovation, [and] digital is a really good fit for the American way of doing things, for our business and culture and education system. As manufacturing becomes much more of an information industry, we’re really poised to win because of the things that have helped America to win at digital in other industries.” David Pivonka, chief scientist for electronics and software at Illinois Tool Works, agrees that DMDII’s work “will significantly affect the way products are designed and manufactured here in the U.S. These changes will help U.S. manufacturing gain a competitive edge.” DMDII is one of just six public-private partnerships launched over the last couple of years under the Obama Administration’s National Network for Manufacturing Innovation, also including outfits devoted to lightweight manufacturing materials […]