You are here: Home / News / Warehouse News / That sounds like a job for … an AGV! 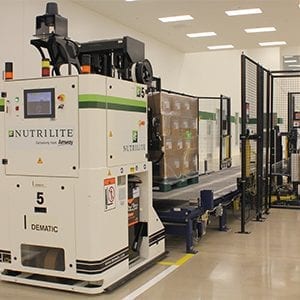 At its new dietary supplement plant, Amway needed a way to move goods in and out of cleanrooms while limiting human touches. The answer? Automated guided vehicles. As one of the world’s largest direct-sales consumer businesses, Amway knows that the quality of its products is paramount to its success. That’s why in an age when many companies outsource production, Amway chooses to manufacture a significant amount of its own health and beauty products, even growing some of the plants that will be used as ingredients on its own organic farms. That can be a challenge. The manufacture of supplements and cosmetics is governed by a host of federal laws and regulations. Amway must follow the Food and Drug Administration’s (FDA) current Good Manufacturing Practices (cGMP) regulations, which specify how ingredients for these products are handled, stored, and used in manufacturing. Among many other things, the cGMP regulations require that production be performed in sanitary manufacturing environments. All that had to be factored into the planning when Amway began work on a project to convert a former warehouse building into a new manufacturing plant for its Nutrilite soft gel dietary supplements. That building, known as the Spaulding facility, is located in Ada, Mich., about three miles from company headquarters, where many of Amway’s goods are manufactured (the company offers some 450 different products in all). The new manufacturing operation, which opened in 2014, has allowed the company to increase production of the soft gels. On top of that, the facility’s proximity to the company’s other manufacturing sites has created opportunities for distribution economies of scale. Though Spaulding had been a distribution center in its previous life, the Amway team started with a clean slate in designing the new manufacturing operation. Among other considerations, it would have to find a way […]