You are here: Home / News / Warehouse News / Robots emerge as an alternative to the traditional welding positioner 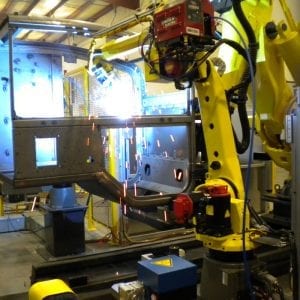 Unable to find the right help, shops turn to automation to keep parts moving through the weld cell This material handling robot not only moves the large weldment into the cell, it also positions the part for the two welding robots to complete their welds. Photos courtesy of Acieta. Welding positioners are ubiquitous in heavy-duty metal fabricating operations. They are incredibly useful for maneuvering large weldments into position to make life easier on welders. Meanwhile, welding robots are becoming just as common, even in small shops . Costs have come down in recent years, and they are easier to program. Given that many metal fabricating companies can’t find welders interested in working for them, they also are looking at robotic welding cells to alleviate bottlenecks in the welding department. Even with the move toward robots in the welding department, positioners are still a part of the mix. Welding positioners serve the same function and a more demanding taskmaster, as welding robots don’t need bathroom or lunch breaks. With more robots in metal fabricating shops, it was only a matter of time before someone asked a simple question: What if a material handling robot replaced the welding positioner in the welding cell? ATI Industrial Automation – Robotic End-Effectors and Automation Tooling Acieta , a robotic systems integrator, has been discussing this type of automated welding cell setup at the Fabricators & Manufacturers Association’s Annual Meeting for the past couple of years. As fabricators have sought more efficiency in their welding operations, they have been much more receptive to new approaches to automation. The FABRICATOR spoke with Pete Rogers, vice president of operations for Acieta’s Council Bluff, Iowa, operations, about this trend and the use of material handling robots as positioners for weldments. The FABRICATOR: Does Acieta have any metal fabricating […]