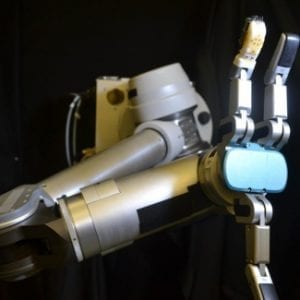 [Credit: UCLA Engineering] A new flexible, sensing “skin” could allow robots to more accurately sense when objects are slipping out of its grasp, according to a new report. Researchers from the University of Washington and UCLA say they ahve developed such a flexible sensor skin that can be stretched over any part of a robot’s body to allow it to gain information on shear forces and vibration that could help it more accurately grasp and manipulate objects. A report on the skin was recently published in the journal Sensors and Actuators A: Physical . The skin reportedly mimics the way a human finger feels tension and compression as it strokes a surface and interprets different textures, according to the report, and measures tactile information with precision close to that of skin. “Robotic and prosthetic hands are really based on visual cues right now — such as, ‘Can I see my hand wrapped around this object?’ or ‘Is it touching this wire?’ But that’s obviously incomplete information. If a robot is going to dismantle an improvised explosive device, it needs to know whether its hand is sliding along a wire or pulling on it. To hold on to a medical instrument, it needs to know if the object is slipping. This all requires the ability to sense shear force, which no other sensor skin has been able to do well,” UW mechanical and chemical engineering professor and senior author Jonathan Posner said in a press release. Traditional tactile skins have not provided a full range of sensory information, and often the ability of fully instrumented fingers on robots to detect touch is limited to just that appendage, according to the report. “Traditionally, tactile sensor designs have focused on sensing individual modalities: normal forces, shear forces or vibration exclusively. However, dexterous […]