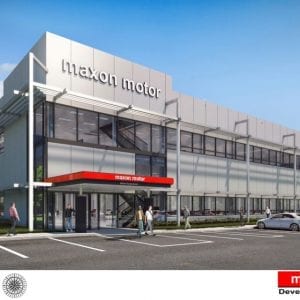 TAUNTON, Mass. — maxon precision motors inc., the U.S. division of Switzerland-based maxon motor AG, today officially opened its new U.S. headquarters and manufacturing facility here. Building the new headquarters was a two-year process, said Chris Blake, president of maxon precision motors . “Taunton was very welcoming in a business and a social sense,” he said during the ribbon-cutting ceremony. “Great partnerships like this don’t happen by accident,” said Tom Hoye, mayor of Taunton. “We’re so glad maxon chose Taunton for its home for the foreseeable future.” Working with developers, users “We work closely with customers to understand the market,” said Martin Zimmermann, chief sales officer at maxon . “We want to double the business in the next five to 10 years, and the U.S. can be as much as 30%. The nice thing about robotics is that the technology crosses industries.” “Today, we typically focus on hardware, but we’re moving to a systems approach,” he said. “We have application teams and business units, such as for robotics, to communicate with customers. We need to understand what systems will deliver, so we develop with customers. We already have local experts for aerospace and medical.” Last November, maxon opened an innovation center near its global headquarters in Sachsein, Switzerland. The precision motors maker spent about $30 million on the center, which is intended to help coordinate its internal research and development. The building will also house additional production of microdrives for medical systems. | Speakers | Exhibitors | Register maxon precision motors history After being founded in 1961 in Europe, maxon started selling its high-precision motors in the U.S. the mid-1970s, recalled executive board member Dr. Karl-Walter Braun. The first U.S. distributor sold his operation back to maxon in 1981, when it opened an office in Menlo Park, Calif., with […]