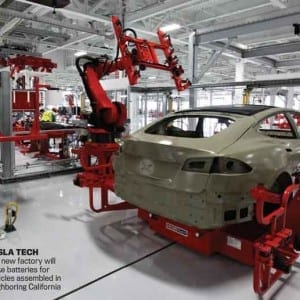 Was wooing TESLA worth the huge incentives Nevada made to close the deal—and what, exactly, does that deal mean for the rest of the states vying for business? It may be decades before the world knows whether Tesla and its battery-powered cars comprised a game-changing industrial revolution or more of a pipe dream, and if Nevada gave away too much of its economic future to obtain the company’s battery-making “gigafactory.” However, Tesla’s decision to build a five-million-square-foot mega-operation near the airport 25 miles east of Reno already has roiled economic-development expectations across the country and reset the arc of American manufacturing. Nevadans are giddy as they watch Tesla move the earth around a 1,000-acre plot in the desert. They’re understandably keen on the economic prospects of thousands of people working at Tesla at promised average wages of around $25 an hour. They’re also hoping for positive economic knock-on effects that they expect to grow over the decades as the plant turns out up to 500,000 battery packs a year. The amount would be more lithium-ion batteries for electric cars than will be made by the rest of the world combined. For his part, Tesla co-founder and CEO Elon Musk likes the location for several reasons. It’s close to the company’s assembly plant and major customer base in California. It’s near the nation’s only known deposits of lithium. Plus, he got a fantastic deal. Nevada threw open the doors to the state treasury to promise Tesla an astounding incentive package worth $1.3 billion, ranked as the tenth-largest such lure ever used by any state. The final sweetener seemed to be Nevada’s promise to move heaven—as well as earth—to clear any regulatory obstacles. “No matter how you slice it, the deal makes utterly no sense. It is just one more example of a government giveaway for a factory that would have been built anyway.” “The gigafactory will mean nearly $100 billion in economic impact over the next 20 years,” Governor Brian Sandoval said after a two-day special session of the state legislature in September essentially handed Musk the keys to a Nevada […]