You are here: Home / News / Forklift News / Driverless forklifts are now a thing 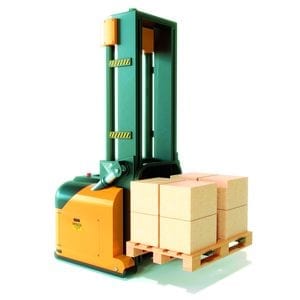 No longer a novelty, automated and semi-automated forklifts are making headway in warehouses where human workers are in short supply. Will they eventually become the norm? In 2012, our article "Leave the (forklift) driving to us?" reported on the driverless forklifts that were then beginning to appear at trade shows, attracting both interest and skepticism. Eight years later, these machines have moved beyond the novelty stage and are increasingly being deployed in warehouses to supplement or replace human lift-truck operators. It’s unknown how many driverless (also known as automated or robotic) forklifts have been sold so far, but the list of companies that offer them is quickly growing. (For a partial list, see the sidebar "Who sells them?" in the online version of this article.) It’s significant that some of the world’s largest forklift OEMs, like Toyota, Crown, Jungheinrich, Kion, Hyster, Raymond, and Yale, are signing on; these companies are innovators, but they don’t commit resources to a new product unless they’re confident there will be significant, long-term demand. Other indicators that the outlook for this equipment is strong are acquisitions like Teradyne’s recent purchase of the robotic forklift maker AutoGuide Mobile Robots . Many observers believe that automated forklifts are on the verge of making significant headway in warehouse applications. So why are driverless industrial trucks getting so much attention now? Who is adopting and implementing them? And what do potential buyers need to know before they make the leap? POISED FOR A BREAKTHROUGH? For the purposes of this article, we’re defining driverless/automated/robotic forklifts as industrial trucks that are equipped with forks and can do the following: transport, lift, lower, put away, and/or retrieve loads, either in fully automated mode, without a human operator, or in semi-automated mode, with a human operator working alongside them. These forklifts are […]