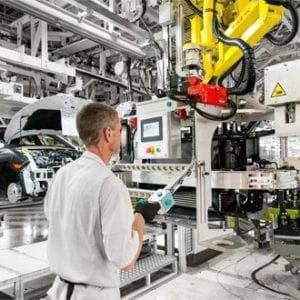 Daifuku, the global leader in automotive factory automation, has completed an upgrade project at Honda of the UK Manufacturing, which has achieved a 30 per cent increase in output. Completed during a series of shutdown periods over the past six months, the project demonstrates how significant improvements in productivity can be achieved through enhancements to existing logistics processes. In 2016, Honda confirmed its Swindon site as the global production hub for the all-new Civic. It has since invested a further £200m in the plant, which now employs more than 3,500 people. Working closely with Honda engineers, Daifuku was tasked with increasing daily production from 640 to 790 units. In terms of cars rolling off the line, this meant speeding up the production rate by 16 seconds – reducing the time finished vehicles were delivered from 85 seconds, down to 69 seconds. Paul Mack, project engineer at Daifuku Paul Mack, project engineer at Daifuku, said: “Daifuku has a long and very successful relationship with Honda over a period of decades. A lot of the conveyors, lifts and other lineside logistics equipment inside the Swindon plant has been there for twenty years, and continues to work reliably and safely. Given their strong environmental ethos, the team at Honda was keen for us to retain as much original equipment as possible, while enabling the sizeable increase in output.” To achieve the 30% increase in productivity, Daifuku engineers focused on three main areas of the lineside logistics process: Triple decking vehicles exiting the paint shop – preventing bottlenecks Creation of more workstations at various strategic locations – increasing productivity Changing the structure of the line to accommodate the introduction of kitting and complete units – improving supply chain efficiencies The significant increase in lineside efficiency was produced by carefully increasing the speed of […]