You are here: Home / News / Warehouse News / 5G is coming, so robotics innovators should get ready, say Verizon, Qualcomm at Robotics Summit 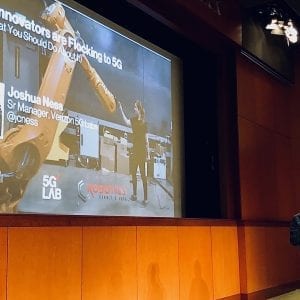 Verizon’s Joshua Ness explains the relevance of 5G at the Robotics Summit & Expo. BOSTON — The opening and closing speakers at last week’s Robotics Summit & Expo here both focused on how robotics developers can prepare for 5G service. The next-generation ultra-wideband networks will reduce latency and increase data throughput and reliability, enabling new robotics applications in the next few years, said the keynoters. First-generation wireless technology refers to analog cellular phone service, which began in the 1980s. Joshua Ness, senior manager at Verizon 5G Labs in New York, recalled “brick” phones in his breakfast session. 2G refers to digital cellular service, based on GSM, the Global System for Mobile Communications. It allowed text messaging. 3G started in 2000 and provided the bandwidth for the first smartphones, including streaming video. From the 2010s onward, 4G has provided a download speed of 100Mbps for higher-quality streaming video, better security, and wider service. “The gig economy was built on 4G,” observed Ness. He added that Verizon’s 4G node for the U.S. Northeast is in Yonkers, N.Y. Over the past several years, telecommunications providers, chip manufacturers, and robotics and artificial intelligence companies have begun exploring how 5G will enable the “wireless World Wide Web” and computing at the edge rather than in the cloud. Verizon 5G mobile service is available in Chicago and Minneapolis, and fixed home broadband is starting in Houston, Indianapolis, Los Angeles, and Sacramento, Ness said. Boston is on the list of U.S. cities to get 5G soon, he added. Verizon encourages 5G collaboration “5G enables supporting technologies, such as computer vision and edge computing,” said Ness. “With software-defined supercomputing resources pushed out to nodes, which you’ve seen everywhere as utility boxes, you’re not limited by distance to the cloud.” This is important for the Industrial Internet of […]