You are here: Home / News / Warehouse News / Why Robots Are a Cure Rather Than a Curse for Manufacturing 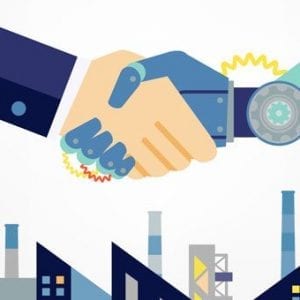 Jason Barton, CCO | Realtime Robotics You can’t escape the fear-mongering around automation, with many claiming that robots will take people’s jobs. However, for some industries such as manufacturing, robots can help address the growing labor shortage. Currently, there are over 522,000 available manufacturing jobs in the United States , which is an all-time high. This trend is set to continue with Deloitte predicting that this figure could soar upwards to 2.4 million by 2028. So, automation, rather than being seen as a curse, will be a necessary cure. The role of robots in manufacturing is still relatively limited and has not fundamentally changed since their initial deployment. Robots remain behind cages and require a vast amount of time and money to integrate them. Simple processes at the beginning or end of the production line are where robots have made inroads to date. For example, with automobile assembly, robots are currently programmed to perform the same operations repeatedly on parts that are always in the same position and orientation. If robots are to solve the labor shortage in US manufacturing, then they will need to significantly expand the type of tasks that they can carry out. They will need to be a lot smarter than current models so that they can operate safely in close proximity with people and other robots. To expand automation, robots will need to be able to understand and react to unplanned variables at speed. Robots will also need to be more dexterous, have spatial awareness, and the ability to learn. Robots are constrained currently by safety concerns and are lacking the ability to navigate dynamic, unstructured environments at speed. This is the biggest challenge that must be solved before manufacturers can expand the role of robotic automation and help address the labor gap. In […]