You are here: Home / News / Warehouse News / Why Co-Bots Will Be a Huge Innovation and Growth Driver for Robotics Industry 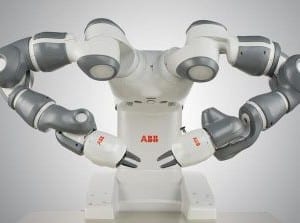 This article was first published on IEEE Spectrum Automaton and is republished here with permission. For the IEEE version, click here ; for the unabridged version, continue reading. Collaborative robots (also called co-bots) are robots designed to assist humans in the performance of their tasks – i.e., to work jointly on a project. Because co-bots are almost plug and play – and very low-cost – SMEs are buying and the segment is quickly growing. There are many reasons for the emergence of collaborative robots: to handle ergonomically challenging tasks, using them alongside humans in small-spaced electronics assembly lines, using them because they are affordable, using them because they are plug and play and easily trainable, using them for their flexibility to handle short runs, and using them to offload repetitive and boring jobs. Co-bots are also emerging because sensors and computer power have become so cheap that they are driving down the cost of robots and making them more available to businesses of all sizes. Initially driving this movement was the EU SME Robot P-P-P started in Europe in 2005 with a goal of increasing worker productivity so that labor-intensive tasks wouldn’t be off-shored. Recently the movement has been promoted by the launch of the Baxter robot and its developer and chief promoter Rodney Brooks. And by the ease-of-use factor: co-bots are easier to train and deploy than big industrial robots. Most professional service robots are collaborative by design, hence co-bots aren’t just for SMEs or for manufacturing use. Offices, homes, labs, warehouses, farms, distribution centers, hospitals and healthcare facilities are all enabling service robots to help them do their jobs better. The market is open-ended but current uses for co-bots include machine tending, material handling, assembly tasks and packaging. They also pick and place, count and inspect. As […]