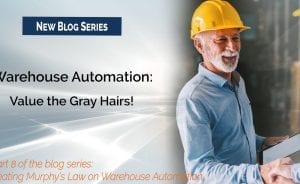 Most companies that have attempted to implement automated material handling equipment have discovered that these projects can be particularly vulnerable to Murphy’s Law, the principal that, “anything that can go wrong, will go wrong.” This blog is eighth in an ongoing series on “Beating Murphy’s Law in Warehouse Automation Projects.” Blog 8 DC While it may be impossible to forecast everything that could go wrong on a project, experienced project leaders, who have implemented similar technology numerous times before, can usually do a better job of anticipating the likely problem areas than can individuals who are working on their first project of this kind. Veterans are far less likely to minimize the risks of going live too soon and can often temper the desire to finish “on time” with the need for the system to work properly. The value of having a project leader who has implemented similar technology many times in the past cannot be overstated. It may be possible to hire such a resource as a company employee, and have that individual then transition to an operational role once the project is over. Some companies have found that it is more practical to use an external consultant in this role. Many consultants have transitioned from one warehouse automation project to the next over a period of two to three decades, giving them vastly more project experience than an operations leader who may have only gone through the warehouse automation cycle a few times. Automation consultants can bring targeted experience to the project during a defined period without having to stay on the payroll once the system is running and stabilized. By submitting your comments, you agree to our Terms of Service . The opinions expressed herein are those solely of the participants, and do not necessarily represent […]