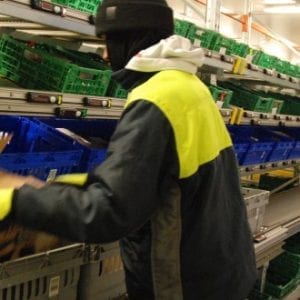 • Riverford Organic Farmers has adopted warehouse automation to improve customer choice and delivery performance at the doorstep. • Daifuku, the world’s leading material handling specialist, advised Riverford on the choice of technology as well as implementation. • New automation at Riverford’s Devon headquarters has given each delivery driver an hour back per day, thanks to increased warehouse efficiency. • Pick-to-light technology has facilitated more sophisticated product choice for customers, enabling the introduction of more products as well as bespoke recipe boxes. Riverford Organic Farmers, Britain’s largest supplier of organic produce, has engaged Daifuku to introduce automated picking, packing and conveyor technology into its headquarters in Buckfastleigh, Devon. Founded by entrepreneur Guy Singh-Watson, the veg box business has carefully introduced automation to elements of its warehousing function to further improve the efficiency of its nationwide delivery service. Crucially, new technology has also enabled the £57 million turnover company to offer its customers an even wider selection of ethically-produced, organic products which include bespoke recipes. In addition to its range of organic veg boxes, Riverford sells an expanding number of organically sourced complementary products such as tinned produce, drinks, fresh fruits and meats. However, more customer choice has brought with it greater complexity, which had led to bottlenecks within the company’s network of franchised distributors, who were spending more time picking complex orders from the back of their branded Riverford vans. Sue Jones, head of business systems at Riverford Organics, explained: “We have around 70 dedicated franchised distributor partners across the UK, each of whom deliver veg boxes as well as the additional items our customers order from our website. When we offered a few additional products to customers, this was not an issue; but once that number began to escalate, the task of picking on the road became onerous […]