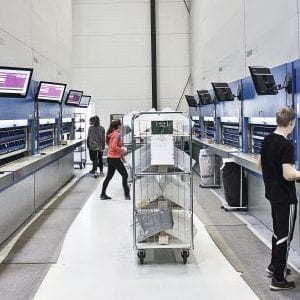 As sales boomed, Danish e-tailer Med24 faced a storage-space crunch. Installing vertical carousels changed all that. Since its founding in 2005, the Danish company Med24 has gone all in where the health and fitness business is concerned. In addition to selling a vast array of healthcare, beauty, and fitness products online, it employs a host of pharmacy assistants and dieticians to provide professional advice to customers. But ironically, it was the e-tailer’s own fulfillment operations that were in desperate need of revitalization a couple years back. With combined growth rates of more than 400 percent over the last three years and a product range that has grown to include more than 10,000 stock-keeping units (SKUs), the company was simply running out of space at its 1,200-square-meter (4,000-square-foot) warehouse. Not only was storage space at a premium at the facility, but the operation was also struggling to keep up with rising order volumes. It was clear to all involved that the warehouse needed a modern update. Among other requirements, the e-tailer needed a setup that would allow for the efficient processing or more than 1,500 orders a day, make better use of available space, and offer flexibility for easy expansion as the company grew. GOING VERTICAL Med24 found the solution it was seeking in Kardex Remstar’s Megamat RS 350 vertical carousel units. Designed for medium-sized loads, the automated units provide high-density storage in a compact footprint. The carousels are also engineered to accommodate high-frequency picking. Plus, they’re designed so that units can be added easily as the client’s needs grow. The latter turned out to be an important feature for Med24. The e-tailer initially installed six Megamat RS 350 vertical carousel units. But it was pleased enough with the results that it added three more units just three months later. […]