You are here: Home / News / Warehouse News / US Adds the Most Jobs in Nearly 3 Years 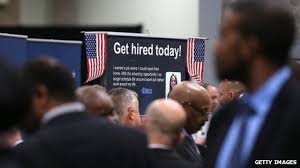 Christopher Rugaber, The Associated Press Washington — U.S. employers added a whopping 321,000 jobs in November, the biggest burst of hiring in nearly three years and the latest sign that the United States is outperforming other economies throughout the developed world. The Labor Department also said Friday that 44,000 more jobs were added in September and October combined than the government had previously estimated. Job gains have averaged 241,000 a month this year, putting 2014 on track to be the strongest year for hiring since 1999. The unemployment rate remained at a six-year low of 5.8 percent last month. The robust job gains come after the economy expanded from April through September at its fastest pace in 11 years. The additional jobs should support steady growth in coming months. Average hourly wages rose 9 cents to $24.66 last month, the biggest gain in 17 months. Yet in the past 12 months, hourly pay is up just 2.1 percent, barely ahead of the 1.7 percent inflation rate. The job gains were fueled in part by strong hiring in retail, temporary services and transportation and warehousing. Those increases likely reflect seasonal hiring for the winter holidays. Shipping companies have announced ambitious plans: UPS has said it expects to add up to 95,000 seasonal workers, up from 85,000 last year. FedEx plans to hire 50,000, up from 40,000. But the hiring also extended across many other parts of the economy. Manufacturers added 28,000 jobs, the most in a year. Education and health services added 38,000. And professional and business services, a category that includes temps but also higher-paying jobs in fields such as accounting and engineering, gained the most in four years. The data could raise pressure on the Federal Reserve to raise interest rates early next year. Many economists have forecast […]