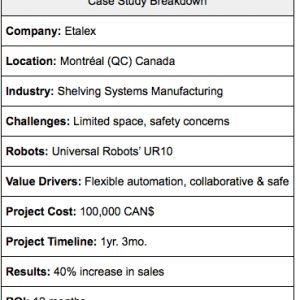 Etalex , a Canadian manufacturer of commercial interiors, metal fixtures, shelving, wood furnishings and heavy-duty racking systems, struggled with picking metal parts out of a press brake leading to significant automation problems. Etalex had no room for safety guarding in front of the press and needed a flexible, user-friendly robot that could safely handle pick and place tasks in the high traffic area. The company adopted the Universal Robots UR10 to fix the problem. Designed specifically for larger tasks, the UR10 is Universal Robots’ largest collaborative robot arm. Challenge “We needed a flexible automation solution that could be used for 10 different production cycles. Since I only have 6 feet of space in front of the brake press, it was important that I could run this application without safety caging around it,” said Etalex Plant Engineer Jean Francois Rousseau. Before the arrival of Etalex’s new robot colleague, an employee would manually unload the press brake eight hours a day. The manual tasks have now been reduced to an hour daily spent on inspecting the quality of each pallet and changing the coils, resulting in an estimated ROI of about 12 months. Etalex machine operator Richard Clive said the UR10 has made the workplace 100% safer. “Before, you had to put your hands close to the brake press. There’s always a chance of an accident happening at any time. But with the Universal Robots, there is no chance of anyone getting injured.” [ Related: Q&A with Universal Robots co-founder Esben Østergaard ] Prior to installing the UR10, Etalex got the approval from the Commission de la santé et de la sécurité du travail du Québec (CSST), which approved the use of collaborative robots at the factory. Even though the risk assessment deemed the robot able to run without safety guarding, […]