You are here: Home / Blog / Thoughts on a Recent Trip to Japan 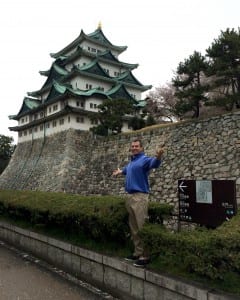 Every 10 years, Toyota has a global conference, bringing in hundreds of executives from corporate and its dealerships throughout the world. This April, it was held in Nagoya, an industrial city with 2.5 million residents. Last time, it was in Kyoto, the former capital and spiritual center of Japan.

The meeting itself was superb, mostly because of the exhaustive planning and Toyota’s commitment to WOW its dealer world. The theme was all about growth and partnership, as Toyota has multiple lift truck brands plus other brands like Cascade attachments. This diversity can result in some go to market turbulence, so bringing everyone together as a member of one team can have both subtle and resounding benefits.

Being the largest lift truck company in the world with dealers just about everywhere, Toyota, Raymond and BT people flooded our hotels with multilingual diversity. Nagoya was buzzing anyway, as April brings cherry blossom season, but the Toyota group added another thousand or so enthusiasts to the mix. The rest of this story relates impressions of Japan.

I’m from New York City and currently live in Boston, so I have some experience in urban environments. Like many US and international cities, Nagoya is a busy place, with lots of people and vehicles and a considerable amount of ongoing construction. The difference is a seeming underlying state of happiness, orderliness and a belief in compliance. The Japanese people, I observed, are busy and highly industrious yet inwardly joyful, peaceful and respectful. We all form cultural opinions based on our perceptions from history and what we have read. I read “Unbroken” and had mine, but many couldn’t be further from what I observed.

For one thing, people in Japan and, particularly young people, genuinely seem to be enjoying life. They’re a little giddy for me, but I’m a native New Yorker raised to be anti-giddy. The truth is I liked engaging with young adults that seemed to appreciate everything and everyone- a stark contrast from many other parts of the world. And no one jaywalks- I mean no one.  It drove me crazy at first—everyone standing at a curb waiting for the light to change when there were no cars coming. After a while, though, I appreciated how orderly things appeared when everyone acts in unison. Part of that probably emanates from such a homogeneous society but the rest just seems to be who they are.

On balance, they just seem thoughtful and precise. No spurious movements caused by conflicting thoughts- just an appreciation for living and a respect of order. It’s true in business there as well- consistent, contemplated movement toward the goal. It may be a little slow for some of us but being thoughtful and careful can reduce errors. You know, “slow down to speed up”…

Don’t get me wrong. I wouldn’t live there as I love the good ol’ USA and our controlled chaos. But for that week, I gained a very favorable impression of a compact country with oversized capabilities and a lot of heart.

I recently attended a virtual networking event for the Bio Tech industry. When asked by the group … END_OF_DOCUMENT_TOKEN_TO_BE_REPLACED