You are here: Home / News / Warehouse News / Thinking inside the box 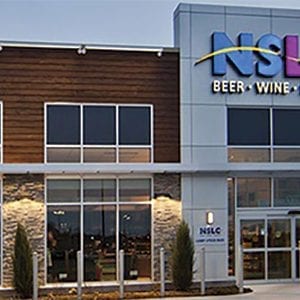 Converting part of its DC to a very-narrow-aisle (VNA) configuration let the Nova Scotia Liquor Corp. handle more products within the facility’s existing footprint. As a Crown corporation, the Nova Scotia Liquor Corp. (NSLC) may operate under government oversight, but it’s subject to the same consumer-driven trends as any private-sector retailer. The need to respond to those trends while serving two distinctly different types of retail outlets and a wholesale customer base created some challenges for the company’s distribution center (DC), which is located in Halifax. NSLC, which sells alcoholic beverages throughout Nova Scotia, owns and operates 106 “corporate” stores. To keep up with consumers’ changing tastes and expectations, the stores are stocking a wider variety of products than in the past while adopting new approaches to store layout, customer service, and merchandising. NSLC also supplies 60 “agency” stores that are authorized to sell alcohol. Agency stores, many of which are small family-owned businesses, order a limited assortment in small quantities on a weekly basis. These conditions have led to stock-keeping unit (SKU) proliferation, including more slow-moving SKUs than in the past, as well as changes in how product is received, stored, and picked. For example, for the agency stores, NSLC typically picks single cases and individual bottles. Furthermore, because Canadian ergonomics regulations limit the weight a worker can lift to 18 kilos (about 40 pounds), many products must be shipped in less-than-palletload quantities. As a result, the DC increasingly had to store pallets holding only one or two layers of product. All of those changes meant “less bulk picking across a greater number of SKUs, and a greater number of articles with smaller quantities on both inbound and outbound,” says Brad Doell, vice president, supply chain, procurement, and facilities. The DC was mostly doing floor-level picking from two […]