You are here: Home / News / Forklift News / The big payback 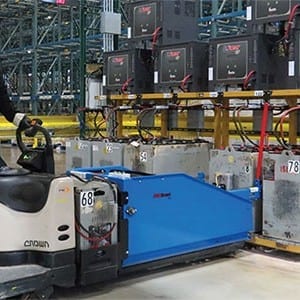 material handling update | Lift Trucks Improper battery rotation was costing DSC Logistics big money. An automated lift truck battery management system put a stop to that—and paid for itself in a few weeks. Old habits die hard … especially when it comes to swapping out lead-acid lift truck batteries. Observe forklift operators in a battery room, and you’re likely to see them do one of two things: walk up and down the aisles looking at batteries before choosing the one that looks newest, or nip inside and grab the battery that’s closest to the entrance. It’s hard to blame them for going either of those routes. Most people will assume that the newest piece of equipment will be the best performer. And operators don’t want to spend more time "out of the saddle" than they have to, especially if their pay is based on productivity. Understandable as those habits may be, they almost guarantee that operators will fail to choose a battery that has been properly charged and fully cooled. That’s a problem, because routinely selecting and using the "wrong" batteries will cause their performance and longevity to degrade. That, in turn, translates into more frequent changes during a shift as well as the need to keep a larger number of batteries on hand. Until three years ago, that was the situation at the University Park, Ill., distribution center (DC) operated by the third-party logistics (3PL) company DSC Logistics. When managers noticed a pattern of unusually frequent changes and shorter-than-expected battery life, they found that incorrect battery selection was to blame. After their original solution produced disappointing results, they turned to an automated battery management system that not only eliminated those problems but also paid for itself in a matter of weeks. FREQUENT CHANGES RAISE RED FLAGS The […]