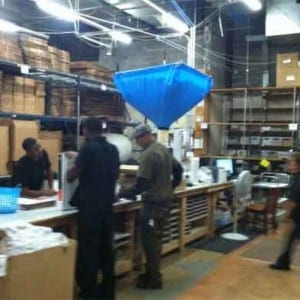 From SCDigest’s On-Target E-Magazine Sears Builds a "Cheetah Stores" Network for eFulfillment; Home Grown DOM System Provides the Smarts SCDigest Editorial Staff No company likes to spend lots of money on capital investments, although the way Amazon.com has been throwing up fulfillment centers in recent years maybe it is an exception. Sears Holding Corp. of course is the parent of retailers Sears and Kmart. It’s no secret that the company has had some operational and financial challenges in recent years, and spending tens of millions in capital to construct more distribution centers to handle growing ecommerce volumes likely was not an attractive option. SCDigest Says: It’s good story that well illustrates the strategic and operational complexity of multi-channel – and the value of DOM technology. So Sears took another route, using a subset of its stores and some existing store DCs and building efulfillment capabilities in them, powered by a internally built Distributed Order Management (DOM) system that decides what orders should be fulfilled where and provides flexibility to adjust those decisions in near real-time based on capacities and other issues at the fulfillment points. The aggressive program earned Sears Holdings the second place in the 2014 Supply Chain Innovation award, as presented last Fall at CSCMP’s annual conference in San Antonio. In its case study on the project submitted to CSCMP, Sears noted that "As customers have shifted more of their shopping online, best-in-class competitors are building capabilities by investing in distribution centers throughout the country in order to provide one to two day delivery service to customers. SHC [Sears Holding Corp.] needed a way to improve the speed of online fulfillment quickly without significant capital investment." Ultimately, Sears decided to invest in building fulfillment capabilities in a small subset of its store network as well as a few […]