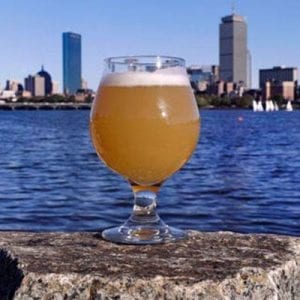 BOSTON (AP) — Who wants to drink that dirty water? Some of New England’s leading breweries will compete Oct. 1 to see who can turn the questionable water of Boston’s Charles River into the tastiest suds. Six area breweries have signed on for the first ever "Brew the Charles" challenge, a highlight of HUBweek, a weeklong Boston-area festival celebrating innovation in art, science and technology. Nadav Efraty, CEO of Desalitech, a Massachusetts water treatment company that’s sponsoring the competition, hopes it helps spotlight the importance of water conservation and water-saving technologies. "We’re having fun here, but at the end of the day, we want to educate the public and decisionmakers," he said. "We’re all efficient with our energy because we know it has environmental and financial costs. We need to think exactly the same way about water." The river, which winds through 23 Massachusetts communities before ending in Boston Harbor, has come a long way since it gained notoriety in "Dirty Water," the Standells’ 1960s hit and one of Boston’s adopted theme songs. Upgrades to wastewater treatment plants over the decades since, now prevent raw sewage from being dumped directly into the river, and environmental regulators have cracked down on improper sewer connections. The U.S. Environmental Protection Agency gave the Charles a B+ for meeting water quality standards for almost all boating and some swimming in its most recent annual report card. There’s even a movement to build a permanent swimming facility in the river. A portion of the proceeds from "Brew the Charles" will go toward that effort. Desalitech pulled about 4,000 gallons of water from the river and treated it in one of its reverse osmosis systems. The water arrived last month at Boston Beer Co. (the makers of Samuel Adams), Cape Ann Brewing Co., Castle Island […]