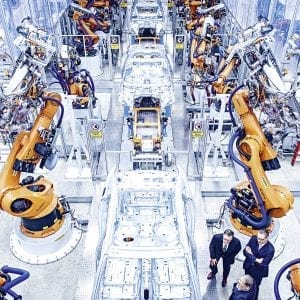 The automotive industry is undergoing the most fundamental transformation in its history and, as this article suggests, a flexible approach to software development will become essential to companies that want to stay competitive. As well as applications development, industry is experiencing the impact of other key technologies such as: robotics and automation; supply chains, warehousing and logistics; digitalisation; electric engines; autonomous systems; and connectivity, or the internet of things. Clearly, it would be almost impossible to go into any great depth in a 2,000-word article, but we will at least bring to your attention the new technologies that are already changing the automotive landscape. Looking back in time First of all, let’s go into reverse gear and set the scene. The car industry has always been one of the sectors that had the most advanced technology and processes. The assembly line did away with the craftsman-like approach where one highly skilled person or a small group of highly skilled people would perform all necessary tasks in the production of a finished vehicle. The first assembly lines in automotive manufacturing were introduced in the early 1910s, and since then, large numbers of people have been involved in the production of cars, each person performing a relatively simple task, in just about every large-scale operation. And by sub-dividing the production in this way, it became possible to reduce the complexity of each task to the point where some tasks could be automated and robots given the job. Robots everywhere Welding is probably the most well known task for robots in automotive production. Robots also do heavy lifting and conveyors carry the cars along a linear production line while the robots work on them. Here is a list of applications of industrial robot arms in automotive manufacturing: welding : this is the […]