Skip to content
You are here: Home / News / Warehouse News / Smartglasses get a second look from warehouses 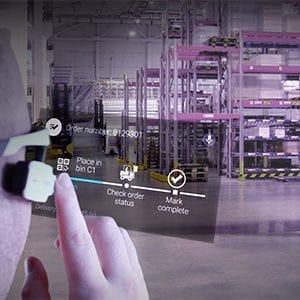 With several successful pilots in the books, DCs are starting to show real interest in the technology, vendors say. But is it ready for prime time? Always on the lookout for ways to improve efficiency in their logistics operations, companies are increasingly experimenting with smartglasses in the warehouse. Powered by their own processor and battery, these wearable high-tech eyeglasses collect data from a building’s wireless network, then project text and numbers onto a tiny screen incorporated into the glasses. From a user’s perspective, the display looks like full-sized text, overlaid on top of whatever “real world” scene the wearer is viewing at the time. The idea is to give workers hands-free access to computer-generated info, eliminating the need to carry handheld scanners or written documents—like pick lists, manuals, or printed instructions—with them, thereby boosting productivity. Applied to logistics, smartglass technology can enable “vision picking” by projecting visual cues and directions for order fulfillment tasks into a wearer’s field of view. But the technology holds the potential to do much more than that. Advocates say it can support various warehouse applications from training programs to forklift navigation, helping build a case for adding smartglasses to the supply chain. Among the early adopters is DHL Supply Chain, the supply chain services division of the giant international parcel carrier and logistics specialist. After the success of an initial smartglass trial in 2014, the company announced in August 2016 that it was rolling out a second phase of the project. Phase two will include pilot programs in facilities in the U.S., the Netherlands, and the U.K. By providing its warehouse workers with an augmented reality (AR) view—a live view of the physical environment supplemented by computer-generated input—of their surroundings, the company can give individual workers visual instructions on where each picked item needs […]