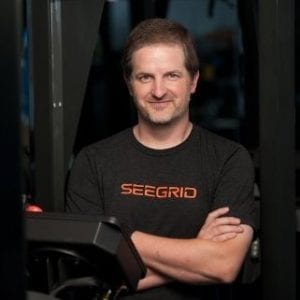 PITTSBURGH — Seegrid Corp. today announced that its vision-guided vehicles have traveled 2 million miles at customer sites without a single personnel safety incident. The company’s self-driving industrial vehicles for materials handling reached 1 million miles safely in April 2018 . In comparison, the U.S. Occupational Safety and Health Administration ( OSHA ) reported nearly 40,000 serious accidents and one fatality per week related to manually driven forklifts last year. Seegrid stated that its vision-guided vehicles ( VGVs ) are designed to “excel at routine and repetitive tasks, work seamlessly alongside human co-workers, and mitigate safety risks.” Seegrid’s autonomous mobile robots ( AMRs ) use its proprietary Seegrid Vision navigation technology and redundant safety systems. Stereo cameras, algorithms, and machine learning enable the VGVs to collect and process more data about the environment than laser-based systems, the company said. With major customers in manufacturing , distribution , and e-commerce order fulfillment such as Amazon, General Motors, Whirlpool, and Jaguar Land Rover, Seegrid claims to be a leader in autonomous materials handling. The Robot Report spoke with Jeff Christensen, vice president of product at Seegrid, about the company’s milestone and its approach to autonomous materials handling. Is the direct comparison between Seegrid’s robots and forklift usage and the accident rate reported by OSHA correct? Have there been near-misses? Christensen: Manned industrial trucks move similar-sized loads, and “forklifts” is the colloquial term. They’re analogous. Since our trucks can be driven manually, we see all sorts of shenanigans when people drive — they run into racking and overhead conveyors. When the vehicles are in autonomous mode, that doesn’t happen at all. This is the message for those who don’t think automation is for them: Safety is the No. 1 reason for customers to change processes from manned to unmanned trucks. Are automated […]