You are here: Home / News / Warehouse News / Sam’s Club will deploy autonomous floor-scrubbing robots in all of its US locations 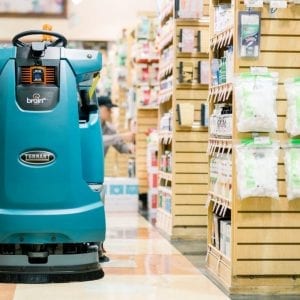 The past six months have seen a fairly aggressive acceleration in the option of robotics and automation as companies look for ways to augment (and, likely, replace in some instances) human workers. The appeal is certainly clear during massive pandemic-fueled shutdowns. Sam’s Club has been into robotic floor cleaning for a bit longer, having already deployed Tennant’s T7AMR scrubbers in a number of locations. But this week the Walmart -owned bulk retailer announced that it’s adding another 372 this year , bringing the technology to all of its 599 U.S. stores. The robot can be piloted manually, but the addition of Brain Corp .’s service allows for autonomous operation. That’s certainly a welcome feature, given the cavernous size of these sorts of warehouse stores. Perhaps even more interesting here, though, is that the software can do double duty, using the mopping robots to examine shelving inventory at the same time. Sam’s Club parent company Walmart is already using robotics to perform inventory in its own stores. In January, the company announced that it would be adding Bossa Nova robots to an additional 650 locations, bringing the total up to 1,000 in the U.S. The Tennant/Brain Corp. system is still in the pilot stage, though there’s a lot to be said for a robot that can efficiently perform both tasks during non-peak hours. Like store cleaning, inventory is a pretty massive undertaking at stores of this scale.