You are here: Home / News / Warehouse News / Running on autopilot 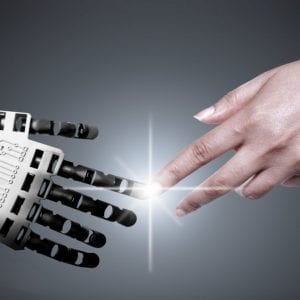 The growing role of AI in supply chain management Rapidly evolving technology and a digitally focused world have opened the door for a new wave of automation to enter the workforce. Robots already stand side-by-side with their human counterparts on many manufacturing floors, adding efficiency, capacity (robots don’t need to sleep!) and dependability. Add in drones and self-driving vehicles and it’s no wonder many are questioning the role of humans going forward. Supply chains, although automated to a degree, still face challenges brought about by the amount of slow, manual tasks required, and the daily management of a complex web of interdependent parts. The next generation of process efficiency gains and visibility could be on your doorstep with artificial intelligence in supply chain management, if only you’d let the robots automatically open it for you. History of automation Mankind and machines have worked in harmony for decades, with some citing Henry Ford’s adoption of the assembly line way back in 1913 as its early beginnings. Fittingly, D.S. Harder, an engineering manager at the Ford Motor Company, officially coined the term ‘automation’ in 1946, using it to describe the increased use of automatic devices and controls in mechanized production lines. The race for automation supremacy set off a race for the ‘lights out’ factory among many rival automobile companies. The idea was to automate all tasks with no human presence required on-site. Production could happen continuously 24 hours a day. It is still the dream of many manufacturers today. Thanks to automation’s roots in the industrial revolution, many associated the term with mechanical production lines and warehouse floors. But more recently a number of significant developments in various other fields have led to an expanded definition. The digital computer, improvements in data-storage technology and software, advances in sensor technology and […]