You are here: Home / News / Warehouse News / Roll out the barrels! 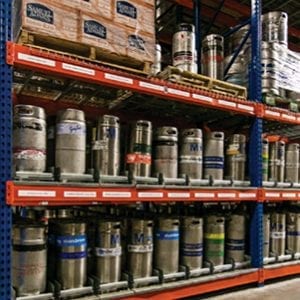 With its craft beer business booming, beverage supplier Atlas Distributing needed a better way to store and handle heavy kegs. Specialized gravity-flow racks provided the answer. Sometimes, business opportunities come along that are too good to pass up. That was the case for Atlas Distributing, an Auburn, Mass.-based beverage distributor, when it acquired the rights to distribute Yuengling beer in the central part of the state in 2013. Although landing the contract was a coup for the distributor—Yuengling hadn’t been distributed in the Bay State since the early 1990s—it also created a space challenge for the company’s DC. For Atlas, a family-owned and -operated beverage distributor founded in 1933, the space problem had been brewing for some time. The company, which provides beer, wine, and non-alcoholic beverages to more than 1,700 customers, carries about 1,500 different beverages, with nearly three-quarters of those stock-keeping units (SKUs) consisting of beers. Owing to the boom in craft beers in recent years, its inventory of these specialty items had been steadily increasing, putting a strain on the company’s storage capacity. "When you take on any new brand, you have to figure out how to fit it into your warehouse," says Amanda Lamoureux, the company’s warehouse and inventory supervisor. The Yuengling contract essentially brought the problem to a head. To accommodate the popular lager, Atlas would either have to add another 5,000 square feet of costly storage space or make better use of the space it already had in its Auburn, Mass., DC. STAYING ON TRACK Given the costs involved, Atlas quickly rejected the idea of expanding the warehouse’s footprint or renting outside space. Instead, it decided to focus on finding ways to optimize its use of the existing facility, where goods are stored in racks and on floor stacks. (Most products were previously […]