You are here: Home / News / Warehouse News / Robots With “Hands” that Pick and Pack Delicate Products at IncredibleSpeeds 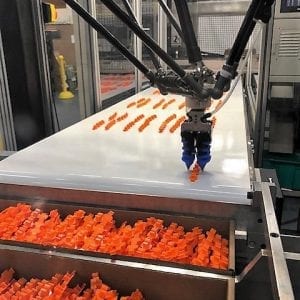 Robots with hands that can pick delicate objects would potentially be transformative in distribution if these arms could be attached to mobile robots. But first we have to understand the capabilities of robots with “hands” better. I visited Micron Products to hear about their installation of a robot, really two integrated robots, to automate the process of picking and placing small plastic fasteners into shipping crates. I was interested in learning more about robotic gripper systems used in picking applications and seeing the technology in action. Micron Products produces billions of parts a year. This contract manufacturer – headquartered in Fitchburg, Massachusetts in the U.S. – specializes in plastic injection molding for the medical device, aerospace, defense and life sciences markets. In this industry you win business by offering customers low unit prices. “That requires automation and inventiveness,” Salvatore Emma said. Mr. Emma is the President and CEO at Micron Products. For a company that manufacturers billions of parts, their facility was surprisingly small, roughly 120,000 square feet. The company employs just over 100 people across three shifts. Prior to the implementation of the robots, the injection molding machine pushed out pieces at high speed onto a conveyor line, and six workers would scoop up a whole line of pieces and put them in boxes for shipping. The pieces produced are one of the components used in constructing automotive seats. The fasteners go inside the seats and help hold the internal wiring of the seat together. “This was the worst job in the plant,” Drew Santin, the Vice President of Business Development said. Workers would try and get out of working in this cell. “They had to work at a furious pace.” Even stopping to itch their nose could make it difficult to keep up. But this project was […]