You are here: Home / News / Warehouse News / Robotics and the click-to-ship revolution 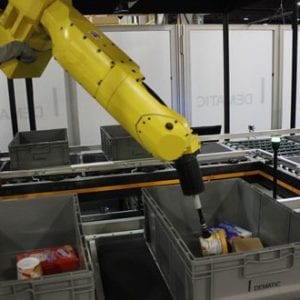 Robots have always been considered as futuristic. The reality is, they are entering the here-and-now in a significant and transformative way – and nowhere more so than in the modern warehouse. By Simon Cooper, Business Solutions Sales Director, Dematic Northern Europe. Across all walks of life, robots, in the form of autonomous cars, drones and voice-activated artificial intelligence, are gaining public attention. Trials of autonomous cars have taken place in several major cities already, including London, and drones have been famously used by Amazon to deliver online orders. But robots are set to have a far wider influence on industry, logistics and retail enterprises. Of course, articulated robots have been a common sight in automotive assembly plants for years, and to some extent, they are often seen within warehouses assembling pallet loads. But, the use of robotics for ecommerce order fulfilment is something new and is fast becoming a major focus of attention for the large retailers. Robotics will soon become the key differentiator for retail businesses competing on cost-to-serve and speed of delivery for online orders. Many retailers are aiming for 15 minutes from click to ship – an ambitious target that can only be achieved through the use of robots. Major retailers across the globe are actively engaged in seeking solutions to these challenges. The interest in robotics is strong. A recent report published by Research and Markets found that worldwide sales of warehousing and logistics robots hit $1.9 billion in 2016 and predicts that the market will reach $22.4 billion by the end of 2021. In a separate study by analysts, Tractica, worldwide shipments made by warehousing and logistics robots are set to rise from 40,000 units in 2016 to 620,000 units annually by 2021. This growing interest in warehouse robotics is being fuelled, in the […]