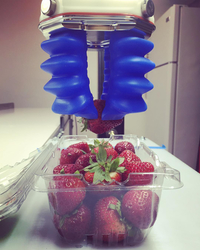 Backers include robot arm vendor Fanuc, automation provider Honeywell, as sector sees rising integration. Robotic gripper designer Soft Robotics Inc. has landed $23 million in venture capital from funders including the robotic arm manufacturer Fanuc, and plans to use the new backing to accelerate its growth and to drive international expansion in its core packaging and manufacturing sectors. The round was co-led by Calibrate Ventures and Material Impact , with additional funds from existing investors Honeywell , Hyperplane, Scale, Tekfen Ventures, and Yamaha. Industrial automation provider Fanuc also joined the deal as a new investor, Bedford, Massachusetts-based Soft Robotics said Monday. The funding follows a rising tide of investments in the warehouse automation sector, although most of those checks have been written to vendors of mobile, wheeled platforms—as opposed to static arms and grippers—such as the $50 million venture capital round raised by self-driving forklift maker Vecna Robotics , the $46 million money raised by autonomous mobile robot (AMR) vendor Fetch Robotics , $25 million for AMR provider 6 River Systems Inc. (6RS), and $26 million in funding for AMR maker Locus Robotics . In contrast, fewer startups have been raising funds for the "end effectors" that allow robotic arms to use specialized grippers to grab the individual "each picks" that are critical for e-commerce fulfillment work. One exception is the automated piece-picking startup RightHand Robotics Inc. , which raised $23 million in 2018. However, the difference between the two camps may be closing, as an increasing number of firms have moved to integrate their approaches to both picking and moving warehouse inventory. For example, Soft Robotics’ new financial connection to Fanuc follows close on the feels of an existing technology integration between the two firms, announced in December 2019 as an effort to integrate Soft Robotics’ mGrip adaptable […]