You are here: Home / News / Warehouse News / Palletizing for the digital age 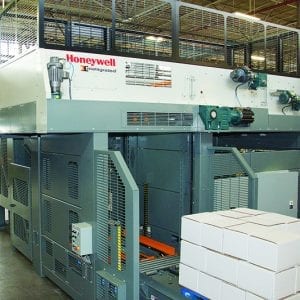 Palletizing in the News Palletizing for the digital age Modern System Report: Coop’s automation journey Emerson and Arrowhead Systems partner on machine health monitoring solution Columbia/Okura announces new cobot strategic alliance with Universal Robots Solving the Palletizing Puzzle More Palletizing News All Resources Are you monitoring the right metrics to gauge the success of your operation? For all the talk about e-commerce and the increased demand for piece picking, you’d think the pallet is so 1999. But in Modern’s last three surveys of pallet users, more than 90% of respondents indicated they were using the same or more pallets than the prior year. Yes, we’re shipping more parcels than ever before, but when it comes to getting product from Point A to Point B in truckload and less-than-truckload quantities, the pallet is still indispensable. More pallets translates into more opportunities for automated palletizing and its cousin, automated depalletizing. In part, that’s being driven by the need for efficiency. In a mass production environment, where thousands of uniform cases are coming off the line and going onto pallets for reserve storage, a palletizer is the most cost-effective way to go. It’s also being driven by the shortage of labor willing to work in manual palletizing and depalletizing operations: For proof, look no further than the story Modern ran on Varner’s highly automated distribution center in the March 2020 issue. And, in part, it’s being driven by the end user demand for mixed SKU pallets, end-of-aisle promotional pallets and store-ready, aisle-aligned pallets. As an example, the ES3 facility Modern visited a few years ago in Pennsylvania used robotic palletizers to build store-ready pallets for grocery customers. And, in some instances, it’s being driven by all of the above: Consider the L’Oreal distribution center near Louisville using layer-picking robotic palletizers to build […]