You are here: Home / News / Warehouse News / No site visits? No problem 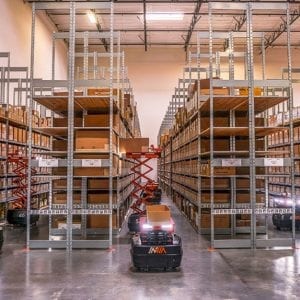 Under pressure from exploding e-commerce demand, labor shortages, and Covid-19 health restrictions, retailers have increasingly turned to warehouse robotics as a way to safely carry out order fulfillment tasks. However, plans to install new fleets of autonomous mobile robots (AMRs) have been snarled in 2020 by travel restrictions and occupancy limits imposed to slow the spread of the coronavirus. In some cases, robot vendors have been forced to cancel plans to send technicians out to install equipment at customers’ sites, which is their normal operating procedure. But that’s not to say those installs have been put on hold. Rather than bow to the obstacles, warehouse robotics companies have stepped up to the challenge, finding creative ways to launch their equipment in distant DCs without ever setting foot on the premises. MAKE YOUR OWN MAP One such company is Westlake Village, California-based inVia Robotics , which announced in June that it had landed a contract to supply its AMRs to Kantsu, a Japanese logistics and warehousing service provider. With the Asia Pacific region experiencing red-hot e-commerce growth—online sales jumped 25% in 2019 and are forecast to reach $3 trillion by 2021—Kantsu was looking to automate fulfillment operations in its primary DC in Osaka, the vendor said in the announcement . As part of the deal, it added, inVia would provide 200 of its "Picker" robots along with its "Logic" warehouse optimization software. In normal times, inVia would have sent a field technician to Japan to oversee the receipt and deployment of the robots as well as the software integration. As part of the process, the technician would also have "driven" a robot around the facility to create the digital map that would allow it to navigate autonomously. But that wouldn’t be possible in this case. The Japanese government had closed […]