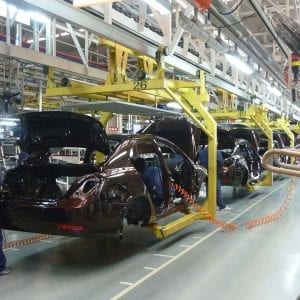 The traditional assembly line moves products from station to station on conveyor lines or overhead cranes. As the work in process moves to a new station, workers, and increasingly robots and cobots – robots that can work safely in proximity to humans – do their work before the product is moved to the next station. Traditional Assembly Line Using an Overhead Crane But Rob Keij, the Commercial Director at Kivnon , says that is the old way of doing business. Kivnon is a Spanish provider of Automated Guided Vehicles (AGVs). “AGVs have traditionally been used to move products from point “A” to “B”. They are still used that way.” But AGVs can also be used as “flexible fabrication platforms” to replace conveyors, overhead cranes, and other forms of bolted down conveyance. Using AGVs to Transition to a Flexible Assembly Line For example, one of Kivnon’s customers manufactures automotive engines. They replaced a monorail with 35 AGVs. This makes it easier to produce products flexibly. If there is a model change, the manufacturer can add two more steps and four more meters to the production line. Or if maintenance is being done machinery in one section of a factory, AGVs can be routed around workers in that area of the factory. This is something a traditional bolted down line can’t accommodate without costly and time-consuming modifications to the material handling equipment. Kivnon offers a couple different types of AGVs. One of their AGVs follows a path that senses magnetic tape that has been laid down on the floor. Another type of AGV sold by the company uses simultaneous location and mapping (SLAM); basically, the AGV has an internal map of the facility embedded in its controls and sensors triangulate on “targets” such as mapped walls and racks so that the […]