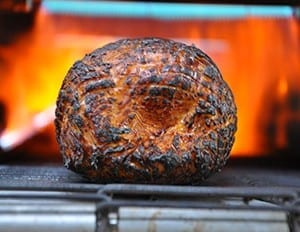 
In a world where hectic, demanding lifestyles are making processed foods increasingly popular, whether frozen or ready-to-eat, there is a growing trend for food manufacturers to produce more food products that are restaurant- or even gourmet-quality.

The success of this trend has in many cases depended on manufacturers recruiting seasoned, successful master chefs to their high volume production kitchens to work as executive chefs and new product developers.

“I believe we are entering an era where master chefs will play a much more important role in the development of higher-quality products for the food processing industry,” says Chef Mike Matranga, New Product Development Manager at Sandridge Food Corporation (Medina, OH).

Matranga, a European-trained chef, says that food processors are beginning to recognize that culinary artists like himself play a vital role in the conception and preparation of high-quality food products. No longer can processors afford to depend on food scientists, technicians and engineers to fill this role.

“Although I have a great love of the gourmet restaurant kitchen and European foods involving delicately made soufflés or game dishes such as pheasant, I saw the opportunity to work at Sandridge as a chance to help bring a new level of quality and freshness in products that the general public can enjoy,” explains Matranga. “For their part, Sandridge decided to put a chef in the kitchen to create recipes and flavors the correct way, so that other chefs want to buy their products.”

Sandridge has been a leader in the North American refrigerated foods industry for more than 50 years. The company specializes in fresh refrigerated deli salads, sides, soups, sauces and specialty dishes created by culinary experts including Matranga.

Justin Donaldson, Executive Chef at Unitherm Food Systems (Bristow, OK), agrees that there is a significant trend among food manufacturers to improve product quality and variety, and that the employment of distinguished chefs seems to play a significant role in achieving this goal.

Donaldson was himself a chef at two Michelin Star-rated restaurants as well as other award-winning locations. His role as executive chef at Unitherm is to help customers identify their goals. Donaldson then translates this to the engineering team – together they decide what needs to be modified, or in some cases radically changed, to most effectively achieve the specifications requested. This can be adjusting the targeted equipment to suit the customer’s needs, applying another process entirely, or the birth of a brand new machine.

Unitherm manufactures a wide variety of thermal processing equipment, including direct flame grills and spiral ovens, which are included along with other advanced continuous cooking solutions at its test kitchen facilities.

Of course, chefs such as Matranga who move from the bistro to the production environment have to make adjustments including broadening their viewpoint to include high-volume manufacturing equipment.

Chef Mike Matranga found the mass production environment is totally different, particularly in terms of the equipment used and the scale of production.

“When you’re used to a 30-gallon tilt kettle on a stove and then you’re working in a plant that does 2,000-pound batches of potato salad, or making your own mayonnaises in 800-lb. batches, it’s a little bit different than using a Cuisinart food processor or other restaurant kitchen tools. So you have to learn about different types of machinery and how they operate.”

Unitherm’s Donaldson says that although food processing equipment is usually much larger and different than restaurant kitchens, including devices such as HMI (human-man interface) screen-based panels and other control systems that can “recall” recipes and adjust batch sizes or ingredients, is usually very helpful to chefs that are new to the production environment.

Matranga says two factors helped him successfully adjust, his ability to find new or temporary uses for equipment, which is a common “makeshift” requirement of even the finest restaurant kitchens, and his ability to collaborate on the design of production equipment, including working with in-house technicians and also those of equipment manufacturers.

“In some cases we work with the engineers right at the equipment factory,” says Matranga. “For example, at Unitherm we bought a grill that featured a steam searing option. I told their engineers that I needed the equipment to steam all the way across so that it could be used for a project I’m working on. So, they customized the steam manifolds accordingly, they work with you to conform the equipment to your needs.”

Matranga believes that some equipment manufacturers are very pro-active in developing systems that are essential for producing restaurant-quality foods with a high level of efficiency.

“Here again, Unitherm can serve as an example,” he says. “They have a piece of equipment that is a combination oven. Their engineers know color development is crucial, specifically on products in cpet trays such as scalloped potatoes and lasagna. So, they’ve engineered a specific design that allows penetration across the surface of the product for color development and browning, further the same equipment can be used for pasteurization.”

Donaldson mentions that having access to equipment that is versatile enough to be used for a variety of foods or recipes is also important to many executive chefs at food processing companies. For example, the spiral oven that Unitherm manufactures enables food processors to maximize productivity and profitability with a small footprint system that is ideal for cooking many types of foods.

As far as the future is concerned, Donaldson says he wouldn’t be surprised if the trend toward restaurant quality processed foods continues to build.

“I believe we may be reaching the point where food manufacturers are using safer, healthier ingredients,” he says. “I believe that some day these types of foods will help societies overcome health issues such as obesity, diabetes and heart disease.”