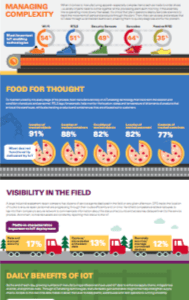 Companies building data networks despite cost concerns. This infographic from Zebra Technologies shows how companies are using—and plan to use—the Internet of Things. Click image to view PDF. A vast majority of manufacturers have begun to use the Internet of Things (IoT) to improve their supply chain operations despite lingering concerns about the cost of the new technology, according to a new survey released today by Zebra Technologies Corp. Eighty-three percent of manufacturers in the poll said they either have IoT implementations in place or plan to deploy it within a year, according to results of the survey from Zebra, a tracking and visibility solutions provider based in Lincolnshire, Ill. Few technology trends have received more hype in recent months than the (IoT), which is generally described as a network of physical objects—or “things”—embedded with unique identifiers that enable them to automatically exchange information with their manufacturer or operator. Proponents say an IoT network allows a distribution center operator or a third-party logistics provider to collect real-time data on the location and condition of every pallet, forklift, tractor-trailer, and warehouse employee. Armed with that information, the business could monitor its supply chain, mitigate loss and risk, improve operations and asset utilization, and enhance customer service, according to supporters of the technology. Respondents to the Zebra survey said the most important enabling technologies they are using to build an IoT are Wi-Fi networks, real-time locating systems (RTLS), security sensors, bar codes, global positioning system (GPS) receivers, and mobile computers. Despite the great promise of IoT for the supply chain, there are some real-world hurdles to installing a system. Asked to list the top five barriers to adopting an IoT solution, half of the surveyed manufacturers cited cost, 46 percent indicated privacy and security, and 46 percent named integration challenges. The […]