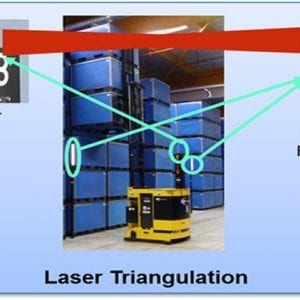 Laser guided vehicles (LGVs) area a flexible automated guided vehicle (AGV) solution. LGVs are a more flexible solution than older forms of AGVs that follows markers or wires in the floor or where navigation is based on following a magnet crumb trail. LGVs can move through a facility on multiple paths and the paths can change as needed. This article explains how a “typical” LGV implementation would take and the steps involved. Different suppliers of LGVs have a somewhat different approach to laser navigation. At JBT, “LGVs have a navigational laser that is typically elevated 10 to 15 feet in the air, spinning at several revolutions per second,” Mark Longacre explains. Mr. Longacre is an Applications Engineering Manager at JBT Corporation. The range of the laser, 30 meters, roughly 100 feet, is an important factor because it limits the infrastructure required. Each vehicle has one (or more) of these rotating laser sensors that interact with targets (reflective strips of tape) mounted along the path. The laser sensors receive the reflected signals and use that data to triangulate the vehicle’s position. At JBT, the navigation algorithms recalculate the vehicle position 40 times per second, which means path corrections stay small. The virtual guide paths are created and changed in Layout Wizard software. In JBT implementations, the targets are usually installed on columns, that would alternate left and right every 50 feet or so. These targets have a center that is highly reflective center surrounded by a quarter inch border that is black. The targets need to be precisely surveyed in a facility. The survey locates the left most edge of the reflective surface and positions it on a CAD drawing with a precision that is usually within one millimeter of what is shown on the drawing. The survey is done […]