You are here: Home / News / Warehouse News / Keeping Robots Strong
Sep 19, 2013
FANUC is all for the collaborative robot revolution, but that doesn’t mean it has to give up its power. 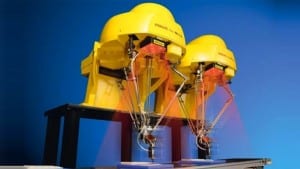 If Rethink Robotics’ Baxter is the face of the new generation of robots, then the mascot for the old generation must be FANUC’s bold yellow robotic arms.

Towering over car assemblies and heavy-duty parts facilities for decades, these robots stand almost as the antithesis to the new human-friendly designs: hardware-based, massive, dangerous and capable of superhuman feats of power and precision.

However, just like those new automation masters at Rethink Robotics and its Danish rival Universal Robots, Mike Cicco, general manager of distribution sales at FANUC America (IW 1000/648), envisions a future in which robots and humans can one day work side-by-side in harmony.

“As robots get smaller and get closer to doing the things that people can do,” he said, “I see robots and people getting closer in proximity as well.”