You are here: Home / News / Warehouse News / Is the Supply Chain Ready for Robots? 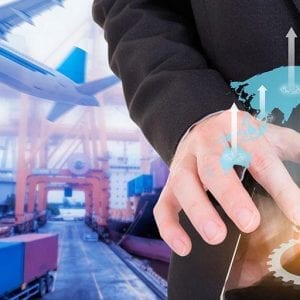 Joanie Courtney Supply chain automation as a strategy to keep up with consumer demand and reduce costs is no new concept. What is new, however, is the accessibility of the latest generation of robotics and automation solutions. Currently, 72 percent of enterprises use robotic automation, and usage is on the rise, accelerating deployment of intelligent machines across manufacturing, warehousing and distribution to a record pace. The ripple effect is a host of new opportunities and challenges for supply chain organizations, the most critical of which is securing the skills required and changing the way people work in a more digitized industrial environment. Each chapter of the Industrial Revolution reveals a common ebb and flow in the number and makeup of jobs. As early as the steam engine, innovation displaced certain workers with new ones who, for example, had cognitive skills like creativity and problem-solving. This will continue with robots. According to the World Economic Forum , by 2022, the shifting labor division between humans, machines and algorithms will result in 75 million lost job roles, but an addition of 133 million job roles, netting 58 million. Amazon exemplifies this dynamic. The company had about 45,000 employees when it introduced robots in 2014. Now, with upwards of 80,000 robots in operation , Amazon employs more than 600,000 workers. Similar results have been found across the organizational spectrum, from large multi-national employers to small manufacturing companies. Out With the Old, in With the New As technologies advance through each industrial revolution, jobs—and job titles—have shifted to mirror newly required skills. In fact, a recent MIT study concluded that in the past decade, occupations boasting a 10 percent increase in job titles also grew 5 percent faster. Many unheard-of job titles, for example, emerged through the rise of cell phones, mobile apps, […]