Abel Womack is excited to introduce Radioshuttle’s Managing Director, Peter McCarthy, as a guest blogger this week. An industry expert with more than 20 years of experience, Peter understands the storage challenges many of our readers face. We think you’ll enjoy a different perspective as he shares his expertise and his story.
_________________________________

It appears to the outside world that new product revolutions happen quickly, but that’s not usually true. The normal course of events is this: an opportunity meets up with an idea (or perhaps the other way around). When this idea is born, no one can guarantee it will take hold. No one is sure if it will serve a purpose. No one knows if it will grow into something meaningful. Only time will tell.

Radioshuttle System brought to you by the Sales and Service Centers of the Raymond Corporation.

In 1993, the Radioshuttle concept was born.  It started as an opportunity from a customer who wanted help, as he had run out of space in his facility. His business was booming and the next year would be bringing more orders and more volume, and, of course, the need for more storage. With this added business, he also believed there should be an effort to become more operationally efficient.

Store more product. Move that product more efficiently. Two common problems presented as a challenge in need of an idea.

Radioshuttle’s design team started working on it. Different concepts were considered and many ideas were developed but then thrown out. As we narrowed in on a solution, one thing started to become clear: there would have to be some form of automation to achieve this desired outcome.

In the early 90s, automation conjured up many feelings and most of them were not positive. Expensive, unreliable, constraining, and inflexible were definitely a few. If automation was to be considered, it had to be powerful but simple. The philosophy driving us was some automation had considerable advantages over full automation, and this automation must be based on:

The design team had come up with a robotic shuttle that could be operated by a radio controller. It was capable of doing a few things autonomously: lifting a pallet a few inches, driving that pallet over a rail forward and backward, and it could carry out a set of instructions at the push of a remote button.

The fact that it worked autonomously was the real key. Having the operator issue a simple command – put this pallet away or go retrieve that pallet – and have the shuttle carry out the work while the operator drove and got another load, increased throughput dramatically.

As for the design and construction of this shuttle, electric drive motors were reliable and economical. Sensor technology was evolving nicely and could be used, PLC’s were becoming more and more capable, and batteries could provide the required hours of operating time if the robotic system was built just right.

This machine would run on a specially-designed rail.  Storing pallets on rail was already being done worldwide in the form of drive-in racks, but they were not designed to efficiently move pallets in and out, and they could only hold one SKU as deep and as high as could be stored in a bay.

With rails on each storage level and a robotic machine to access pallets automatically, the concept of a Radioshuttle system was born. Better yet, with each level capable of storing and retrieving a different product than the level below or above it, the system overcame the limitations that plagued drive-in rack design.

It’s been 22 years since the idea of Radioshuttle became a reality. How has it stood the test of time? Consider that:

As the concept grew into reality and one system became hundreds, we continued our investment into Radioshuttle. Improvements in functionality, reliability, and power efficiency happened each year.  Radioshuttle continued to be on the cutting edge of helping customers solve their storage and efficiency challenges. 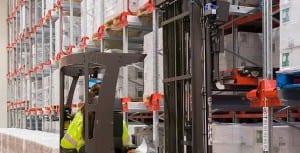 Today, Radioshuttle continues to evolve at a rapid pace. It works in fully-automated environments, in tandem with Laser Guided Vehicles, directed by WMS or WCS instead of an operator’s remote, and even incorporates innovative new battery technologies and charging systems.

We’ve never stopped pushing and never stopped evolving the concept, all with the simple goal of storing more product and moving that product more efficiently.

In March of this year, the biggest market expansion in the Radioshuttle story became reality – a new partnership.  In North America, Radioshuttle is now brought to you by the Sales and Service Centers of the Raymond Corporation.

Raymond brings much to this partnership: a world-class company which excels at bringing best-of-breed technologies to their customers; a continent-wide service and parts support group that will keep Radioshuttle systems in perfect running order; and, most of all, Raymond’s unmatched technical and industry-wide expertise. This brings an understanding of how Radioshuttle can be applied to bring about unique and meaningful solutions providing great benefit to warehouse operations throughout their network.

This idea of Radioshuttle has come a long way, successfully passing the test of time. We continue to look at opportunities to apply this simple technology with a simple goal: store more product and move that product more efficiently. We look forward to helping in any way we can with this new product revolution, 22 years in the making. Feel free to leave me a comment below.

I recently attended a virtual networking event for the Bio Tech industry. When asked by the group … END_OF_DOCUMENT_TOKEN_TO_BE_REPLACED