Cisco has added packages aimed at manufacturing and utilities to its internet-of-things offering.

Cisco has extended its internet-of-things portfolio with a set of packages aimed at manufacturing, transportation, utilities, and oil and gas businesses, including one automotive robotics monitoring project that has saved $38m in downtime costs in six months. 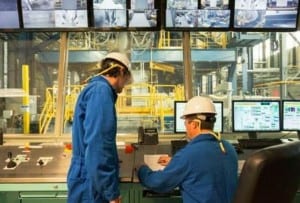 The networking giant has been working with industrial robot maker Fanuc on its zero-downtime project to monitor how its robots are performing in factories and then to use that data to spot when robots are likely to break down.

Previously Fanuc had no way of tracking how the robots were performing because it could not get access to the diagnostic data. Any downtime could cost its customers $16,000 per minute.

Automotive factories run at full capacity with no window for downtime but by monitoring the health of the robots: “It gives us the ability to predict a failure a few weeks before it is going to happen,” said Andy Denny, Fanuc America robot operations VP, at a recent event at Cisco’s headquarters in San Jose, California.

“Just think about a manufacturing facility that can actually predict something is going to fail before it fails, so that it doesn’t have downtime,” he added.

The system is currently running on 1,800 manufacturing robots, with the aim of expanding that number to 2,500 by the end of the year.

Cisco sees the internet of things as a major growth area over the next few years, as more and more objects are connected to the internet.

As well as the digital-manufacturing offering, Cisco said it is working with Schneider Electric on a smart connected pipeline package aimed at oil and gas companies, which features leak-monitoring, location, and prevention as well as cybersecurity protection.

Cisco also unveiled a security system for electricity substations, and a network architecture for transport systems. It said the city of Linz, Austria, will be the first to use this to streamline operations across its tram network.

Read the article from ZDNet.com here.