You are here: Home / News / Warehouse News / Industrial robot sales for 2015 set new record in spite of troubles in China 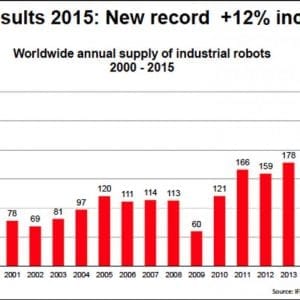 Asia is still the strongest growth market with 156,000 units for the region, a 16% increase over 2014, but that figure is much lower than the 27% projected. The rate of growth of China-made robots penetrating the market also didn’t grow at the projected rate but it did grow at a healthy 31% rate.

At a press conference and CEO Roundtable held today at AUTOMATICA in Munich by the International Federation of Robotics (IFR), where these figures were presented, the consensus rationale for not meeting the overall and China projections was:

The IFR, in the remarks of their President, Joe Gemma, strongly believe that manufacturing jobs will change in the new era of digitalization and Industry 4.0. Workers will focus on jobs that require judgement, common sense, creativity, problem-solving and dexterity, and be freed from repetitive tasks. Further, mobile robots will optimize materials handling; collaborative robots will assist workers in a variety of tasks; and simplification of the use of robots will enable more companies to use robots.

At the IERA Awards ceremony held last night in Munich, the IFR/IEEE Invention and Entrepreneurship in Robotics and Automation (IERA) award was given to ABB Robotics for their two-armed YuMi collaborative robot.