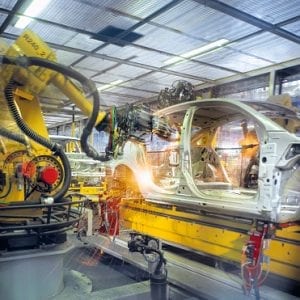 As robotics assume a larger role in manufacturing, author and MIT professor David Mindell focuses on the critical role humans play in automation. Car body welding robots in car factory The rise of automated and robotic-driven manufacturing has changed the way many suppliers view production, but it hasn’t made the human touch obsolete just yet. “The people are always going to be there in one way or another,” says David Mindell, professor of Aeronautics and Astronautics, and Dibner Professor of the History of Engineering and Manufacturing at the Massachusetts Institute of Technology (MIT). “The more we think about that, the better off we’re going to be when we design these systems.” Mindell’s book, Our Robots, Ourselves: Robotics and the Myths of Autonomy , highlights the importance of integrating people into automated systems. According to Mindell, the technologies expanding and transforming the capabilities of robotics will do the same for people, allowing the two to evolve together. “Sometimes [robots] actually increase the human workload, sometimes they reduce it, but very rarely do they come in as a substitute for a human task,” Mindell says. “ISSUES IN AREAS SUCH AS DEXTERITY, PRECISION FITTING AND ASSEMBLY ORIENTATION JUST MAKE PEOPLE A BETTER FIT FOR SOME JOBS.” Collaboration between robotics and humans in manufacturing is beginning to gain steam. For example, when a human and a robot are working on a collaborative assembly task, they can alternate putting parts onto a system. “The robot can hand the human a tool, …work on an area that the human is not working on, or the robotic work can be rescheduled when a human comes in and the robot stays out of the way,” Mindell says. Direct human input in the manufacturing process isn’t going away anytime soon, as issues in areas such as dexterity, precision […]