You are here: Home / News / Warehouse News / How to optimize autonomous navigation through networking 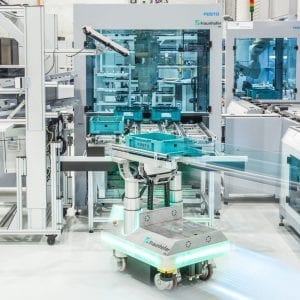 Manufacturers and logistics providers have an an immense and growing need for flexibility. Mobile robots with increasingly autonomous navigation and common interfaces can help meet this need, as new and maturing technologies take robotics to new levels of industrial utilization. The Fraunhofer Institute for Manufacturing Engineering and Automation (IPA) in Stuttgart, Germany, has been developing its NODE technology to improve the navigation of autonomous mobile robots. From AGVs to AMRs Automated guided vehicles ( AGVs ) have been a major component of the recent expansion in commercial service robots. Almost 111,000 units were sold in 2018, an increase of 53% in sales and 60% in units compared with 2017, according to the International Federation of Robotics. Of these, almost 8,000 were involved in production, and the rest were primarily in the e-commerce sector. While some mobile robot applications are still feasible with the rigid structures used by AGVs, such as physical tracks, many dynamic environments require more agile robots. The trend toward smaller batches and higher product variability requires greater flexibility in production and materials handling. Autonomous mobile robots ( AMRs ) use adaptive navigation algorithms to learn new routes and meet this need. Concentration and mixed fleets require sophisticated software Two additional trends are occurring in mobile robots. The first is concentration. As more robotic vehicles drive in an environment, software developers have responded with more efficient systems for fleet management, traffic control, and dynamic path planning. The second trend is toward heterogeneous fleets. Many AMRs are equipped for specific processes, and large facilities may have multiple types of robots from different manufacturers. Many vehicles can communicate only with similar robots. The has been progress here with VDA 5050 , a new interface proposed by the German Association of the Automotive Industry. In future, this interface should become […]