You are here: Home / Blog / How much is your time worth? Tales from the IT Department

I was a young, brash new hire, and the first real IT Manager in the company’s history.  Eager to prove myself, I tackled the highest profile project I could find; replacing the ERP server. The server, though only three years old, had seen better days. Its’ memory was barely adequate.  The hard drives were small and slow.  Communication with terminals and printers was an abysmal 19.2Kb via serial connection. But I was going to change all that. Faster processor, more memory, raid drives and the coup de grace would be an Ethernet connection at a blistering 10Mb/sec. This was going to be a state-of-the-art server (state of the art for 1998, but still).

My first step was to contact the ERP vendor for recommendations. Considering the ERP system is the lifeblood of the company, I had them quote the biggest, baddest server with all the bells and whistles. I tried to negotiate the price down, but they wouldn’t budge. They noted how the $30k quote included $6k for hardware, $4k for software and OS licenses, and the rest was what they called “system reliability”.

“So you’ll provide warranty support for the hardware?”

“No, you’ll need to contact the manufacturer for that.”

“Then, you’ll transfer all the data from the old server to the new one?”

“I can build the system myself for less than half the price. I don’t mind a reasonable markup, but what exactly am I paying for?”

After discussing it with my manager, we decided to build our own server. It took a little over a month, during which I built and re-built the server about five times. When there were choices that I was uncertain of, I plowed ahead. When I hit a road block, I’d wipe the drive clean and start from scratch. It took longer than expected, but I just kept thinking about the $15k savings.

When it was finished, I was a hero. Never had they seen such speed and responsiveness. And with the savings, we replaced dumb terminals with PCs and bought new laser printers. Everyone was happy.  Everything was fine. Until… 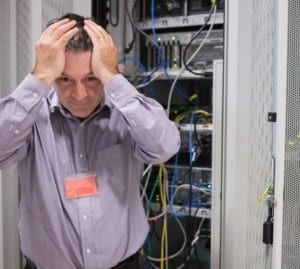 Ten months later, the accounting manager came to me in a panic; the system was out of balance. We re-ran the reports and reviewed each transaction for the day but could not find the problem. I contacted ERP support. They logged into the server and found the problem within minutes. The temp drive had run out of space.

“How could this happen?” I asked. The support person couldn’t understand how this happened either. “When we build a server, we always reserve sufficient room for the temp drive.” At that point I was forced to admit that I built the server, and just used the default settings.

The good news was that the problem could be fixed. The bad news was that it took over 60 hours of backing up files, restoring logs, and re-running transactions. During which time the office was at a complete standstill. We still dispatched technicians and delivered parts, because, no matter what, we had obligations to our customers. But every transaction needed to be written down and logged for entry after the ERP system had been restored.

So in the end, I had an intimate knowledge of the now fully-functional server, and saved some money, most of which went to paying for overtime to enter the missing transactions. And all it cost me was a week of 20 hour days. All things considered, I should’ve hired the experts.

Before starting your next big project, whether in IT or Operations, you may want to contact the experts first. Equipped with the latest tools and technologies, plus years of hands-on experience, they’ll consider all your options, avoid small issues that may be overlooked, and recommend the best solution.

Tony D'Arezzo is the Information Technology Manager at Abel Womack.

I recently attended a virtual networking event for the Bio Tech industry. When asked by the group … END_OF_DOCUMENT_TOKEN_TO_BE_REPLACED