You are here: Home / News / Warehouse News / From Washington to your warehouse 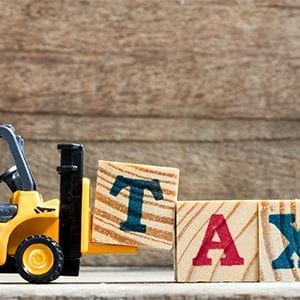 Here’s how the federal government’s actions on trade and tax law will affect forklift makers and their customers. There will be winners and losers. If you’ve been keeping up with goings-on in Washington, then you’re aware of policy changes implemented earlier this year that are affecting U.S. businesses. What you might not know is that two in particular—changes in tax law under the Tax Cuts and Jobs Act of 2017 , and the imposition of tariffs on a wide range of products—could have a direct impact on companies that buy, sell, or manufacture forklift trucks and parts in the United States. Here’s a look at what the federal government’s actions on taxes and trade could mean for forklift buyers and suppliers. This article is intended to provide general information; be sure to consult your tax and customs-compliance advisers for guidance on how these changes will affect your company. FINDING TREASURE IN TAXES By all accounts, 2018 is a good year to invest in capital equipment, including forklifts. The Tax Cuts and Jobs Act of 2017, passed by Congress in late December, included provisions that make it advantageous to buy equipment now. One such provision allows many companies to write off capital equipment more quickly than in the past. Specifically, revisions to Section 179 of U.S. tax law allow qualified businesses to deduct more of the cost of new and used equipment, up to a specified limit, and fully deduct it in the same year the property is placed in service, rather than having to depreciate it over a number of years, explains Susan Rice, program manager for Raymond Leasing, a division of forklift maker The Raymond Corp. "Section 179 targets small to medium profitable corporations—you have to be profitable to get the benefit," she notes. The new law also […]