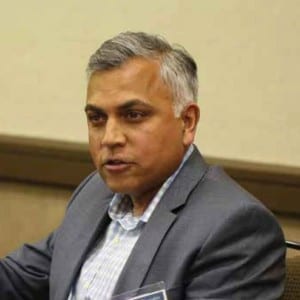 Some things may, indeed, get better with age—but manufacturing facilities are not one of them.

That unfortunate fact is at the root of an issue hindering America’s ongoing efforts toward a much-heralded Manufacturing Renaissance. The average age of manufacturing assets and equipment currently in operation in the U.S. is closing in on 20 years, according to the Bureau of Economic Analysis. What’s more, investments by U.S. firms in the upgrades and upkeep of equipment and facilities has averaged 3.8 percent of revenue in recent years—far below the 6 to 9 percent typically required to stay current and compete effectively with foreign rivals.

“We running behind the times,” Raj Batra, president of industry automation at Siemens, told CEOs gathered for a Chief Executive roundtable held in partnership with Siemens. “If you think about how outdated you feel when your cell phone is six months old, how is it okay to have an automation asset that’s 30-plus year old automation asset on your factory floor?”

Creaky, antiquated equipment and facilities are inherently problematic. More susceptible to cyber risks and lacking the latest smart manufacturing tools and technology, they hinder efforts to improve productivity and shorten time to market. They’re inherently problematic in a marketplace where the mantra is mass customization—a time when producing smaller batches of a wider variety of goods is becoming de rigueur. Finally, they are a liability during a window in which America has the opportunity to reverse a decade-long race toward outsourcing production to countries with low-cost labor.

“People think that it’s technology that you can only deploy in a $1 billion-plus enterprise. But I’ve seen car washes that are using state-of-the-art technology.”

“The good news in this sea of bad news is that technology is very scalable,” noted Batra, who pointed out that digitization can cut time to market in half and reduce engineering time by 30 percent. “People think that it’s technology that you can only deploy in a $1 billion-plus enterprise. But I’ve seen car washes that are using state-of-the-art technology.”

The Digitalization Decision
For many companies, time-to-market drives the desire to pursue digitization. The upside varies from companies like Boeing, which would benefit from the ability to speed up design processes and power through its huge backlog of aircraft orders, to companies in industries where trends come and go so fast that lengthy lead times translate to a warehouse full of unsellable inventory. Software can erase the boundaries between the real and virtual worlds. By enabling companies to plan and project the life cycles of products and production facilities, it can dramatically reduce both the time it takes to bring a new launch to market and to move the assembly line.

Randy Hauser, president of Chicago Metal Fabricators, would like to harness this technology to streamline the front-end production of the heavy components and large assemblies his company makes. “We’re a job shop, and we have to create processes every day, because we’re doing custom products and have rolling product lines,” he explained. “I would like to be able to digitize the parameters of the old equipment I have, what it can and can’t do, and then, when I get a part in, model it. Then I can have the software tell me which is the best equipment to run it through.”

In many cases, digitization also enables companies to fix design flaws earlier in the process, noted Batra, who recounted working with the Jet Propulsion Lab to build the rover that went to Mars. “We couldn’t send it back and forth to Mars to figure out how it would land in the atmosphere, so we had to virtualize the environment, model it and simulate everything. Once everything is digitalized, your options are immense. The data you get from a product that is all sensored up lets you do everything from control the service aspect of it and better design the next generation of products. It’s a virtual cycle of improvement.”

Some things may, indeed, get better with age—but manufacturing facilities are not one of them.

Coping with Costs
While most participants agreed that digitalization has enormous potential, many business leaders expressed frustration about navigating implementation and justifying the cost. Those leading private companies pointed out that owners sometimes have unrealistic expectations for a return on capital investments.

“You can’t buy anything for a six-month ROI,” said one CEO. For others, the price tag simply seems too high. “I’d love to have a completely automated system— design it, model it and push the button and it goes,” reported David Price, CEO of Brown Industries, which builds top quality van bodies, trailers, rail equipment and custom vehicles. “But we haven’t found the right people who can come in and do it cheaper than we can here with low-cost labor. We only build 800 trucks a year, three or four a day, each one different. For all the programming required by every different type of truck, you would need a full team of staff spending more man hours programming than I think you would actually building the truck.”

The pressure on public companies to perform in the short term is also an issue, noted John Leonardi, president of Foth Production Solutions. “Publicly held organizations tend to spend a little less [on capital investments] and use more Band-Aids,” he said. “The smaller privately held companies might actually spend a little more automating because they don’t have the pressure of the shareholders.”

The cost barrier, however, is coming down. “It’s off-the-shelf technology,” noted Batra. “I see golf ball manufacturers digitalizing.” Furthermore, research suggests that American manufacturers are well aware of the need to invest in updating and upgrading facilities. Results of a recent study by the Manufacturing Institute showed that about 20 percent of companies expect to spend more than 40 percent of their operating budgets on capital expenditures over the next five years to bring old machinery up to speed.

Another recent survey reported that while on 19 percent of respondents were currently using Big Data to increase decision quality in the manufacturing process, 70 percent were interested in doing so.

Clearly, most business leaders see transformation as inevitable—more a matter of when than if. “We know there’s going to be huge value created,” summed up Doug Bellin, global senior manager of manufacturing at Cisco Systems. “But where do we start? I can’t redo the whole plants so what can we do to add some things to it? It’s that old saying—how do you eat the elephant? One bite at a time. Which bite do you start with? That’s the hard part.”