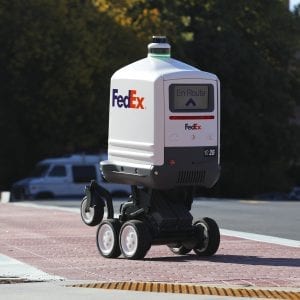 As parcel carriers throughout the industry wrestle with rising package volumes sparked by the triple-whammy impact of booming e-commerce, pandemic online shoppers, and the winter holiday peak, FedEx Corp. says it sees a solution in new technologies that have been pressed into service much sooner than most of the industry expected. Under pressure from those market forces, online shopping is expected to reach record levels in the coming weeks, leading to a peak holiday season unlike any other, the Memphis-based firm said. Prior to the pandemic, FedEx had projected that the U.S. domestic economy would hit 100 million packages per day by calendar year 2026, but it now projects the market will hit that mark three years sooner than expected, cresting that level by 2023. To handle the surge, FedEx says it has invested in advanced technologies and intelligent automation solutions , the company said in an “Innovation Showcase” webcast today. “We’ve been in peak since the beginning of the pandemic, and now we’re going to put peak on top of peak,” Rob Carter, FedEx’ executive vice president and CIO, said in the event. In response, the company is leaning heavily on solutions like robotic sorting arms, mobile pick-by-light systems, autonomous DC tugs, last-mile delivery bots, and wireless package tags, the company’s executives said. FedEx is currently using four robotic arms installed in March at its Memphis sorting hub, according to Aaron Prather, senior technical advisor at FedEx Express. Provided by the vendors PlusOne Robotics and Yaskawa Motoman , they currently run eight hours per day, sorting 1,200 to 1,300 packages per hour across a variety of parcels such as letters, small boxes, and “polymorphic” items that change shape as they move through the system. Warehouse employees have named the arms Sue, Randall, Colin, and Bobby, but they will […]