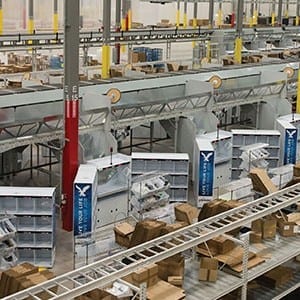 material handling update | Conveyors and Sortation In a departure from traditional practice, American Eagle Outfitters designed its new automated fulfillment center to handle both store replenishment and direct-to-consumer orders from the same inventory. E-commerce is here to stay. If there were any doubt about that, the more than $600 billion spent online this past holiday season should be proof that consumers like the convenience of shopping anytime and from anywhere. No retailer wants to be left out of the digital marketplace, so most have been steadily increasing investments in their online presence. And as more volume shifts to e-commerce orders, these retailers are adjusting their supply chains accordingly. Such is the case with American Eagle Outfitters (AE). AE is one of the nation’s leading apparel retailers, offering trendy merchandise through more than 1,000 stores with its American Eagle and Aerie brands. It also operates a thriving e-commerce business. It filled its first direct-to-consumer orders in 1998 through ae.com and today, serves customers in more than 80 countries. To keep up with steady growth and to adjust to changing retail dynamics, American Eagle is in the process of revamping its U.S. distribution network. Traditionally, it has served stores in the eastern portion of the country from a DC in Warrendale, Pa. (near company headquarters in Pittsburgh), while supplying stores in the west from a facility in Ottawa, Kan. For online orders, the company used a separate fulfillment facility in Kansas. But that’s all changing. AE recently opened a new distribution center in Hazle Township, Pa., that’s designed to support both stores and online orders. The Hazle facility, which offers easy access to major interstate highways, has already taken over the fulfillment of e-commerce orders; the facility expects to begin shipping store replenishment orders in the eastern U.S. within the […]