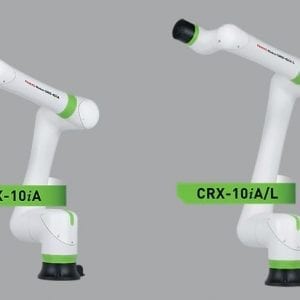 The FANUC CRX-10iA cobots debuted at iRex 2019 in Japan. FANUC has been quite busy of late. It introduced a line of arc welding cobots at FABTECH in November. Earlier this week it began distributing the mGrip modular gripping system from RBR50 company Soft Robotics. And today at iRex in Tokyo, the world’s largest robotics show, FANUC introduced its series of CRX cobots. There are two models: CRX-10iA that features a 1240 mm reach and the CRX-10iA/L that has a longer 1410 mm reach. Both of the CRX cobots have 6 axes and a 10kg payload capacity. As far as we can tell, FANUC hasn’t shared too much information about the CRX cobots just yet. But perhaps the first thing you noticed is the color of the cobots. The company’s older CR Series cobots are green, while the new CRX models have a white finish. FANUC said the CRX cobots also are “significantly lighter” than the CR Series. Because they’re lighter, FANUC said the CRX cobots are easier to install, including for mobile manipulation purposes. The CRX line is designed for handling, assembling, and arc welding applications. Here is a quick comparison chart of the CR and CRX lineups. As we learn more about the CRX series, we will update this chart: Comparing FANUC Cobots Axes Reach (m) Like the CR series, the CRX line can be equipped with a vision system. At iREX, the CRX series is demonstrating its ability to load metal blocks into a ROBODRILL machine tool, among other tasks. The teach pendant for CRX series can be replaced with a tablet, which FANUC said should increase ease-of-use by giving users a familiar interface. Our first post with footage of the new #FANUC CRX! Visit https://t.co/A2b2xYfoA1 to learn more, and visit booth B-31 Aomi Hall at […]